It’s almost World Migratory Bird Day! Coming up on Saturday, May 9, we are working with Environment for the Americas to raise awareness on the importance of migratory bird species and celebrate the ways they connect our world. Unfortunately, the world of birds and people can collide in the ocean and Great Lakes, where marine debris can be found in even the most remote places, including far-off islands where seabirds find shelter and breeding grounds. 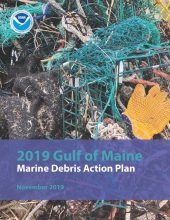 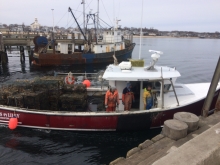 With the support of a NOAA Marine Debris Program Removal Grant, the team at the Center for Coastal Studies (CCS), located in Provincetown, Massachusetts, is mobilizing fishermen and volunteers to identify, document, and properly dispose of derelict fishing gear (DFG) from Cape Cod Bay and the Cape Cod National Seashore. 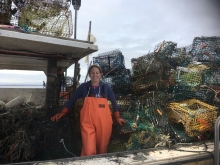 From the nation’s oldest fishing port, to feeding grounds for endangered North Atlantic right whales, to a rapidly expanding aquaculture industry, New England’s productive coastlines provide so much for the people and animals who depend upon them. Our partners in the Northeast are working hard to give a little bit back by stopping marine debris at its source, removing existing debris, and educating local communities.

While the Northeast region of the U.S. is home to several large population centers that create large amounts of consumer debris, there is also a marine debris issue lurking beneath the ocean surface. Derelict fishing gear is a prevalent problem in most of the Northeast states.

Lost or discarded fishing gear that is no longer under a fisherman’s control becomes known as derelict fishing gear (DFG), and it can continue to trap and kill fish, crustaceans, marine mammals, sea turtles, and seabirds. Factors that cause gear to become DFG include poor weather conditions, gear conflicts with other vessels or bottom topography, or the use of old, worn gear.

The Northeast United States is a place to enjoy all nature has to offer—snow in the winter, flowers in the spring, both sandy and rugged coastlines for summer, and beautiful foliage in the fall. Unfortunately, while enjoying the great outdoors, you might run into something else that plagues this region: marine debris. Thankfully, there are several efforts underway to address marine debris in this region. Check out some newly-established projects that are working to remove and prevent debris in the Northeast.

Marine debris is a pervasive problem throughout the United States. In the Northeast, it’s no different. Luckily, there are several projects underway to combat this problem. Focusing on prevention, the ultimate solution to marine debris, two of these more recent projects use education to stop debris in its tracks.

The From Shore to State House project, led by the University of Hartford and supported by the NOAA Marine Debris Program (MDP), has developed a college-level course which introduces students to marine debris. Students learn about the subject, participate in cleanups, and then talk to their local legislators about marine debris policy. The best part? The course materials are open-source, so other college instructors can replicate the program. 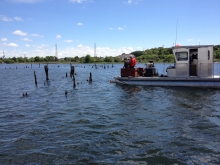 Supported by a newly-awarded Community-based Marine Debris Removal grant from the NOAA Marine Debris Program, Clean Bays is working to remove industrial debris from 18 miles of East Providence shoreline, as well as from the navigable waters of Providence Harbor. With plenty of debris left over from its use as an industrial port and from the intentional dumping of discarded items, this area has become not only an eye-sore, but a threat to navigation and the surrounding environment. To restore this 18-mile stretch that encompasses approximately 350 acres of habitat, Clean Bays will remove 165 tons of debris!