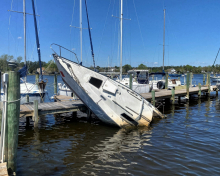 For the first time ever, North Carolina is mounting a comprehensive effort to address and remove abandoned and derelict vessels that blight the coast, pose navigational hazards, and degrade important coastal habitats. The North Carolina Coastal Federation is partnering with the NOAA Marine Debris Program and other federal, state, and local partners to take the first important steps to document and remove these vessels. 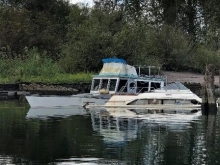 Abandoned and derelict vessels are a common story and the all-too-common ending is that  marinas end up burdened with the responsibility for them. The longer they sit, the more they deteriorate, taking up valuable space and becoming a safety hazard. Despite the best of intentions, many boats can end up as abandoned and derelict vessels in our coastal, estuarine, and river environments. With the help of the NOAA Marine Debris Program removal grant and partnerships with marinas in the Certified Clean Marina Program, the Oregon State Marine Board hopes to interrupt this common narrative.

We are excited to announce our new monthly webinar series, Salvaging Solutions to Abandoned and Derelict Vessels. Every fourth Wednesday of the month at 3 pm ET, the webinar will feature experts on a topic related to abandoned and derelict vessels (ADVs), to share perspectives and solutions from across the country on common ADV issues.

A perfect contrast: A once treasured and well-traveled vessel lays on her side along the shore of the Rachel Carson Reserve in Beaufort, North Carolina where wild horses graze, researchers discover, and school children learn about estuaries on nature hikes. Abandoned vessels, some left or forgotten by the owner and others remaining after storms, pose complex legal challenges that are often roadblocks to prevention and removal efforts (Spoiler alert: there is a happy ending for Beaufort, North Carolina!). 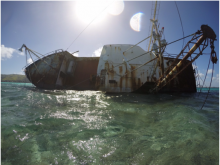 The Pacific Ocean bonds and connects many islands and people throughout the region. These communities share in the art and science of traditional navigation, which has fostered an intimate attachment to the ocean over many generations. Today, these island communities also share in the struggle of mitigating marine debris as they work to protect the ocean. 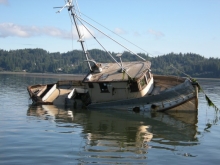 Though the legal definition of an “Abandoned and Derelict Vessel” varies, an “ADV” is generally considered to be any vessel in significant disrepair that may pose a threat to the public or the environment. “Derelict” frequently refers to vessels that are dilapidated with an identifiable owner, while “abandoned” vessels are those where the owner is unknown or has surrendered rights of ownership. Vessels can become abandoned and derelict for many reasons, ranging from neglect to theft, to catastrophic weather.

Abandoned and derelict vessels (ADVs) are a marine debris problem in many places around the United States, and pose a particular problem in Florida and the Caribbean. In this region, which boasts both beautiful weather and waters, a high number of recreational and commercial boaters unfortunately equals a high number of ADVs. These large marine debris items range in size from small recreational vessels to large steel-hulled commercial ships, but the majority of the ADVs in the region are from recreational use. These vessels may be abandoned or become derelict at the end of their useful life, after damage from storms, or when boat owners cannot keep up with their maintenance due to time and economic constraints. Unfortunately, the removal of debris items like ADVs is extremely costly and logistically difficult, so many ADVs remain where they are and these vessels can lead to all sorts of problems. 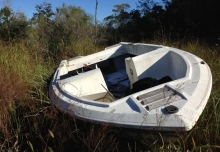 Abandoned and derelict vessels (ADVs) are a type of large marine debris that is a problem throughout the country. ADVs can be aesthetically unappealing, but can also create real problems by damaging important habitat, creating hazards to navigation and recreation, leaking pollutants into the environment, and impacting fisheries resources. Vessels can become derelict in a variety of ways, such as being abandoned by their owner after acquiring damage or sunk during a severe storm. Unfortunately, this type of debris can be extremely difficult and costly to remove, often making it difficult to address.

ADVs are particularly a problem in the Gulf of Mexico, especially due to the many severe storms in this region. 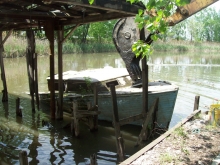 Over the years of the NOAA Marine Debris Program, there have been many efforts around the country to rid our waters and shores of marine debris. As part of our ten-year anniversary celebration, let’s take a look back at one of those efforts in our Great Lakes region.

Fordson Island, in the Lower Rouge River, is located near Detroit, Michigan, and was the site of some pretty neat removal efforts back in 2011. The area actually has some cool history which you can read more about here. The shore of Fordson Island, which hosts some of the last remaining undeveloped habitat in a very industrialized area, was unfortunately the site of a lot of marine debris, most notably abandoned and derelict vessels.