Microplastics, or plastic pieces smaller than 5mm in size, are commonly found in our ocean and coastal waters. Do the microplastics that these larval crabs encounter while drifting in the ocean affect their survival and ability to return to estuaries? With support from a NOAA Marine Debris Program Research grant, a team of University of Delaware marine scientists have joined forces to study this question.

Spanning over 18,000 acres, Jamaica Bay is one of New York City’s unique estuaries for conservation, as well as urban recreation. The Bay is almost equal to the size of Manhattan and is surrounded by the Rockaway Peninsula to the South, Brooklyn to the West, and Queens to the East. Abandoned boats and other mid- to large-scale debris are scattered throughout the Bay.

The NOAA Marine Debris Program’s Mid-Atlantic region spans the states of Delaware, Maryland, New Jersey, New York, and Virginia, as well as the District of Columbia, and is home to the largest estuary in the United States, the Chesapeake Bay. Unfortunately, derelict fishing gear and lost crab pots can threaten these important resources by continuing to capture and kill wildlife, damage sensitive habitats, and even compete with and damage active fishing gear.

Imagine you’ve planned a big trip to the beach with your family and friends, loaded up the car with supplies or jumped on a plane, and traveled to your vacation spot, only to find a beach littered with plastic beverage bottles, stray fishing line, chip bags, cigarette butts, and other debris. Would you stay and play, or be on your way? What if there were no debris, would you be more likely to return in the future? These are the kinds of questions we asked to better understand the relationship between marine debris and the coastal tourism economy. 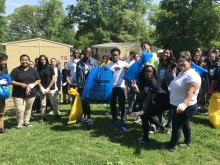 Students in Prince George’s County, Maryland are leading the way in marine debris prevention and cleanup in their community. Through the Alice Ferguson Foundation’s Watershed Leadership Program (WLP), more than 400 students from seven local high schools have learned about plastic pollution and executed school-based action plans to prevent marine debris.

With over 400 miles of coastline and over 10,000 miles of tidal shoreline, the Mid-Atlantic region is bountiful in its cultural, social, and environmental diversity. The Mid-Atlantic region encompasses coastal states from New Jersey to Virginia, and is no stranger to the impacts of marine debris. Like many coastal areas around the country, this region is often inundated with debris ranging from derelict fishing gear to consumer debris items, like plastic bags, bottles, and food packaging. Fortunately, there are several great efforts currently underway to address marine debris in the Mid-Atlantic. 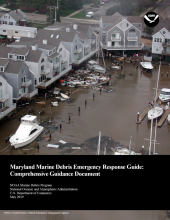 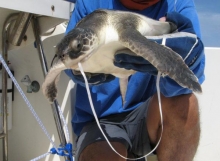 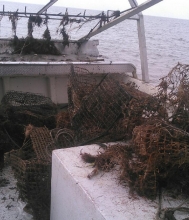 The NOAA Marine Debris Program’s Mid-Atlantic region, encompassing coastal states from New Jersey to Virginia, is no stranger to the impacts of marine debris. Like many coastal areas around the country, this region is often inundated with debris ranging from derelict fishing gear to consumer debris. Luckily, there are several awesome efforts currently underway to address marine debris in the Mid-Atlantic. Check out some newly-established projects funded by the MDP. 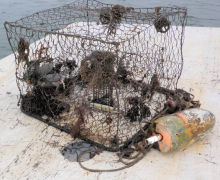 The Chesapeake Bay blue crab fishery accounts for 50% of the United States blue crab harvest, and is worth about $80 million annually. It’s estimated that about 600,000 crab traps (also called “pots”) are actively fished on an annual basis in the Bay. Some crab pots become lost (derelict) when the pot’s buoy line becomes detached or cut, either by vessel propellers, faulty lines, or vandalism. Strong storms can also move pots from their original deployment location, making them difficult to relocate. In addition, pots may be abandoned, as has been observed at high rates in some regions of the Bay. Once lost, derelict pots can damage sensitive habitats and continue to capture blue crabs and other animals, often resulting in their death.