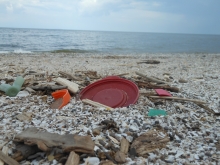 While marine debris is perhaps more commonly thought of as an oceanic problem, the Great Lakes region is an area that is also affected by debris, particularly consumer product items and other such land-based litter. In 2015 alone, the Alliance for the Great Lakes Adopt-a-Beach Program removed 92,616 pounds of debris from Great Lakes habitats. These debris items come from a multitude of sources including overflowing trash cans and other improper waste management, as well as both accidental and intentional littering. Being far from the ocean, many people don’t think about how their trash can end up in our waterways. Weather such as winds and rains can help transport debris into streams and rivers, eventually traveling into the Great Lakes. Once in our environment, these debris items can cause a range of issues, including ingestion by and entanglement of wildlife, hazards for fishermen and boaters, and even simply creating an eyesore on once-beautiful shorelines.