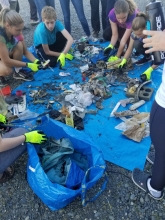 Bottles, bags, plastic foam trays: single-use plastic has become an everyday part of peoples’ lives, and a common sight on beaches around Alaska. Cleaning debris off of beaches can only get to part of the mess, and only serve as part of the solution, especially in Alaska, where there are over 44,000 miles of often dangerous and difficult to access coastline. To address the issue further we have to slow the stream of plastic into a state where plastic is easy to come by, but difficult to deal with. 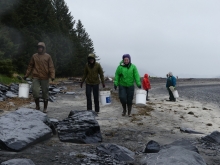 The word “Alaska” may bring to mind images of snowy mountains, icy glaciers, dogsleds, snow-machines, isolated cabins, fishing boats, and amazing wildlife. While those are all things you can find in “The Great Land,” Alaska is also a place where marine debris is an especially impactful and challenging problem. 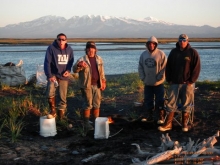 Today is the shortest day of the year in the Northern Hemisphere. For Unalakleet, on Alaska’s Bering Sea coast, this means barely more than four hours of sunlight. The small, remote communities that dot Alaska’s coastline and Bering Sea islands can be as harsh as they are beautiful. The Marine Debris Program has partners in these regions that are hardy and hard-working, but marine debris can still be a huge challenge. The remoteness of these places and the severe weather means that disposing of the debris is one of the biggest issues. We talked to partners in three Bering Sea communities about what happens to the debris once it’s removed from the ocean and shoreline.

Native communities and their in-depth knowledge of local history and conditions are essential for addressing marine debris in Alaska. A large proportion of Alaska’s coast is remote, so addressing debris can be difficult. Native peoples often have specific knowledge and experience that are important for marine debris efforts in these areas and the NOAA Marine Debris Program (MDP) is proud and grateful to have worked with Alaskan Native organizations on several marine debris projects.

Alaska is characterized by its rugged beauty, remote wilderness, and sheer size. These facts also play a significant role in the issue of marine debris in the state. With so much coastline, Alaska receives a huge amount of debris every year from both local sources and places across the Pacific Rim. “Catcher beaches,” where the shape and character of the coastline interacts with weather and ocean patterns to deposit huge amounts of debris, are often remote and can accumulate as much as 10-20 tons of debris per mile. Cleaning up debris in these areas can be difficult, but Alaskans are up to the task, using landing craft, helicopters, and good old-fashioned hard work and Alaskan ingenuity to remove debris in rugged and challenging conditions.

The real trick actually begins once the debris is off the beach. 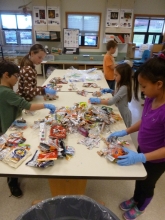 Meet Peter Murphy, the Alaska Regional Coordinator for the NOAA Marine Debris Program. Reach out to Peter at peter.murphy@noaa.gov!

Alaska is a beautiful and unique place. Unfortunately, like much of the country, this area is plagued by marine debris. Addressing this issue can be challenging considering Alaska has an extensive and rugged coastline, much of which is remote and difficult to access. Thankfully, there are many people out there who are working hard to address the marine debris problem in this region. Check out some of the projects funded by the NOAA Marine Debris Program that are working to prevent and remove debris in Alaska. 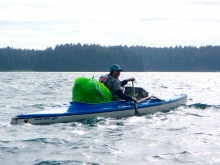 Even though Shuyak Island State Park is a remote wilderness island in the northern Gulf of Alaska, it has been heavily impacted by marine debris. Through a community-based removal grant project funded by the NOAA Marine Debris Program, Island Trails Network (ITN) led 29 volunteers from June 12th to September 4th of this year to help remove marine debris in this area. There were six teams of five to seven sea paddlers, which each spent two weeks camping and collecting debris to restore coastal habitats on Shuyak. During 56 total days of cleanup, we collected 35,036 pounds of marine debris from a continuous belt of coastal habitat (52 miles in length) along the island’s northwest shore. Cleanup teams moved freely along the coast in sea kayaks, which were a convenient means of accessing shallow rocky shorelines. 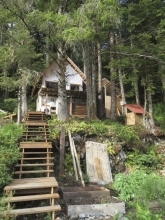 Over the years of the NOAA Marine Debris Program, there have been many efforts around the country to rid our waters and shores of marine debris. As part of our ten-year anniversary celebration, let’s take a look back at one of those efforts in Alaska.

Back in 2012, the community of Tenakee Springs, Alaska received funding from the NOAA Marine Debris Program to remove debris in their remote community. Tenakee Springs, with less than 100 residents, sits about 50 air miles from Juneau in Southeast Alaska and is inaccessible by road. In fact, there are no roads at all in the town, just a long, wide trail that people use to get around via foot, bike, or four-wheeler. 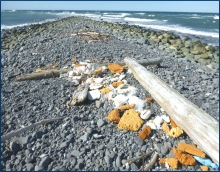 After the 2011 tsunami in Japan, the Alaskan coastline experienced a rise in debris washing ashore. Although there was an increase in many types of debris, the abundance of expanded polystyrene (think foamed plastic) increased on some beaches by as much as 1,600% from 2008 to 2012. This spurred interest by NOAA scientists at the Auke Bay Laboratory in Juneau, Alaska, to explore the interaction between this foam debris and an important Alaskan fishery species: pink salmon (Oncorhynchus gorbuscha). The researchers were interested in both determining the potential of juvenile pink salmon to ingest small foam pieces and understanding the physiological consequences of ingesting foam debris (such as, would ingesting foam alter their growth rates?). Through support from the NOAA Marine Debris Program, the team began an experimental study to address these questions. 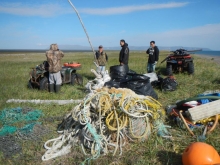 Although preventing marine debris is the ultimate solution, removing debris as it accumulates on our shores is an unfortunate necessity. In Alaska, there are currently some pretty cool removal efforts underway to clean up Alaska’s coasts, which are often remote and difficult to access.

The Island Trails Network (ITN) is addressing the issue of debris in remote areas in an innovative and unique way! This effort focuses on Shuyak Island, an area rich in biodiversity that’s located in the western Gulf of Alaska. This location is exposed to high winds and strong currents that cause marine debris to build up, but also make it difficult to access. To solve this problem, ITN recruited qualified volunteers from around the world to come to Alaska and clean the shoreline using sea kayaks, collecting debris and moving it to more easily-accessible areas, where it is later removed and analyzed.