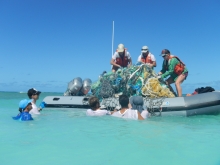 Over the years of the NOAA Marine Debris Program, there have been many efforts around the country to rid our waters and shores of marine debris. As part of our ten-year anniversary celebration, let’s take a look back at one of those efforts in our Pacific Islands region.

The Northwestern Hawaiian Islands (NWHI) are beautiful. Home to many amazing animals and clear, turquoise blue water, they are located far from large human populations. However, despite their distance from people, they are still inundated with marine debris that washes up from faraway places. To combat this debris and preserve this paradise, multiple NOAA offices have collaborated on a yearly removal mission to clean debris from the Papahānaumokuākea Marine National Monument and the shores of the NWHI since 1996. The NOAA Marine Debris Program has been involved in this effort since the establishment of our program—that’s ten years of some pretty impressive NWHI removal!

The annual removal mission, which began in 1996, has removed a total of 935 tons of marine debris to date including the 12 tons of marine debris from this year’s mission. The NOAA Marine Debris Program has supported this yearly effort since the program’s inception in 2006. As the program celebrates its 10th anniversary this year, it also marks ten years of funding this removal effort in the Northwestern Hawaiian Islands. 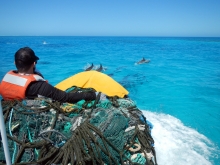 The NOAA Pacific Islands Fisheries Science Center (PIFSC) Coral Reef Ecosystem Program’s (CREP) removal mission in the Papahānaumokuākea Marine National Monument in the Northwestern Hawaiian Islands is completed! For more on this effort, check us out on Facebook, Twitter, and Instagram, and take a look at CREP’s interactive daily map for details on daily activities.

Our team of ten embarked on the NOAA ship Hiʻialakai to begin our journey down the Northwestern Hawaiian Island chain. We began with the oldest and most northwestern of the Hawaiian Archipelago, Kure Atoll.

Landing on the shores of Kure, our team was greeted by the State of Hawaii’s Department of Land and Natural Resources field crew, who remove debris throughout their field season. 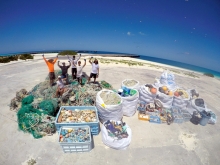 The NOAA Pacific Islands Fisheries Science Center (PIFSC) Coral Reef Ecosystem Program’s (CREP) removal mission in the Northwestern Hawaiian Islands is already half way through! The removal team has finished its work at Midway Atoll and is headed to Kure Atoll for the next phase of the effort. Check us out on Facebook, Twitter, and Instagram for daily updates on this effort, as well as CREP’s interactive daily map.

We were greeted by Bonin Petrels flying in the night like shooting stars and were shuttled in stretch limo golf carts to our rooms. The following morning, a brilliant orange sunrise unveiled all that is Midway Atoll National Wildlife Refuge.

Every year, multiple NOAA offices collaborate to support a marine debris removal effort in the Papahānaumokuākea Marine National Monument (PMNM), located in the remote and mostly uninhabited Northwestern Hawaiian Islands. Due to the PMNM’s location in relation to the North Pacific Gyre and ocean currents, this area is often highly afflicted with marine debris and these efforts are greatly needed. This year, the NOAA Pacific Islands Fisheries Science Center (PIFSC) Coral Reef Ecosystem Program of the National Marine Fisheries Service (NMFS), the NOAA Marine Debris Program, and the Papahānaumokuākea Marine National Monument of the Office of National Marine Sanctuaries have organized and supported an effort to clean Midway, Kure, and Pearl and Hermes Atolls, Lisianski and Laysan Islands, and the French Frigate Shoals. The 2016 mission launched on Tuesday, April 12th, and will work to remove marine debris for a month, until the mission ends on May 13th. 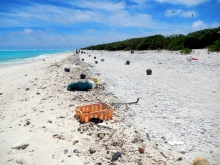